Bricks are very common in the reuse market, especially in Belgium, but also in the Netherlands, France and the UK.

Until the second half of the 20th century, many Western European regions produced their own type of brick, unique in appearance, size and colour, depending on the clay used (which often follows the course of a particular river) and the baking method. Thus, there are countless varieties of bricks - a diversity that is now also reflected in the offerings of reclaimed brick suppliers.

The reclaimed bricks that can be found today are full bricks from walls built with lime-based mortar (or other soft mortars containing clay, ash, etc.). Cementitious mortar, which due to its much stronger adhesion makes the cleaning of bricks more difficult or even impossible, started to be widely used in the 1950-70s and is still the standard option today. Hence, good candidates for reuse are mostly bricks from before this period.

Today, reclaimed bricks are generally used as cladding, not as structural elements. They are valued for their appearance and their particular colour variations. There are also cases where reclaimed bricks are used for load-bearing masonry, but these are more rare. Traditionally, reclaimed bricks were used for old or listed buildings, where it is important that the bricks used for extensions and repairs fit in with the whole. They were also used to construct entire buildings in historic areas, where older bricks are more appropriate. The material also has various applications in interior design and landscaping. 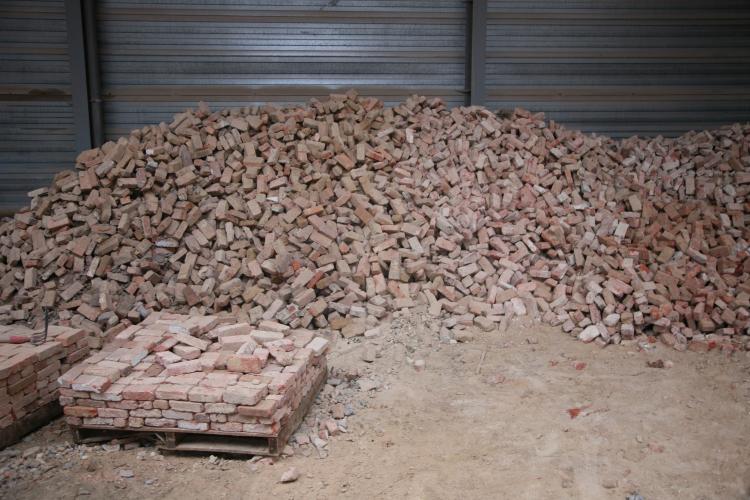 There is a wide range of reclaimed solid bricks, each with its own production method, origin, format and colour. A distinction is often made between handmade bricks, moulded bricks (pressed into moulding boxes) and wire-cut bricks (machine-made using an extrusion press). The bricks on the market were produced between 1800 and 1970 and usually have good mechanical properties. For information on which type of brick is suitable for which application, please contact the traders themselves.